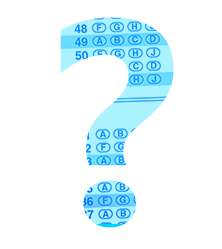 Any time you read a score report from a standardized exam, particularly a norm-referenced test, you’re bound to see percentiles. Why? Because percentiles explain the rank of a test score in relation to the entire testing population.

COLLEGE ADMISSIONS
Percentile distribution on tests like the SAT and ACT correspond to the standard distribution (bell curve) and help test takers and families understand the significance of test scores, especially in relation to levels of college competitiveness. For example, the most competitive colleges usually require scores in the 99th percentile for admission. Considering the arbitrary ranges of the 400-1600 SAT scale and 1-36 ACT scale, a strong grasp of percentiles will help explain the relative and absolute merits of student scores.

Sometimes, though, the test makers clog up their score reports with meaningless and misleading data. The College Board is a prime offender, sharing two different percentile ranks even though only one has value:

Obviously, colleges do not care about the test scores of students who do not take a test. Only pay attention to User Percentiles!

COMPARING TEST SCORES
Paying attention to percentiles presents a basis for comparison of SAT and ACT scores. If, for example, a student scores in the 90th percentile on the ACT and the 70th percentile on the SAT, that student is clearly much better on the ACT. Furthermore, that student might be wise to only send ACT scores with her college applications, ignoring SAT scores entirely. College Board and ACT have collaborated on official ACT/SAT Concordance Tables that pair SAT and ACT test scores by percentile ranks.