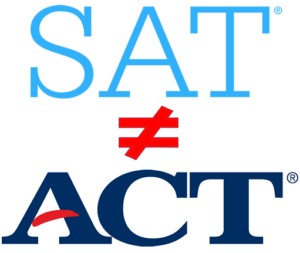 The two big college admissions tests have never been as similar as they are now, especially since the major revision of the SAT in 2015. Both standardized exams measure core reading, writing, and math skills in a timed, mostly multiple choice format.

GRAMMAR
The ACT English and SAT Writing and Language are so similar that you might struggle to tell them apart. The notable distinction lies in timing: students get more time per grammar question on the SAT.

READING
Now that College Board has removed the last vocabulary questions from the SAT, both exams test passage-based reading in the same general way. Students are allotted slightly more time per question on the SAT, but some find ACT Reading questions easier.

MATH
The SAT and ACT cover much of the same arithmetic, algebra, and geometry but differ in terms of the advanced topics each covers. The ACT emphasizes geometry more than the SAT, yet does not list basic geometry formulas. On the other hand, the SAT devotes an entire section to problems that must be solved without calculators and includes Student-Produced Response questions that require students to enter real values rather than select from four possible options.

SCIENCE
Only the ACT includes a science section, which primarily challenges graphical literacy and general scientific understanding rather than specific subject knowledge. ACT graphs, charts, and figures are much more advanced than the ones that appear on any SAT section.

The ways in which these two important tests differ may immediately appeal to some students. Keep in mind, however, the most accurate way to determine which test best suits a particular student’s skill sets is to take both (in practice) and compare the scores using the SAT/ACT Concordance tables.